Motorola may be known for budget smartphones as its G, One, E and Z series are all relatively affordable in the grand scheme of things, but the Motorola Edge is set to be its first flagship phone in a while with a higher price tag.

Unveiled alongside the Motorola Edge Plus (with a much higher price), the Edge has plenty of features you’d find in the top-end phones from Samsung, Huawei, OnePlus and Xiaomi, like a curved screen, 5G connectivity and a top-end chipset, but it’s also not as expensive as some other phones either.

This new Motorola phone shows off what the company’s engineers can create when they aren’t limited by a certain budget, and Motorola fans who are ready for a pricer phone may find it perfect for them.

The Motorola Razr foldable phone from late 2019 was a similar exercise in creating an intriguing phone without the limitations of affordability, and the resulting device was certainly novel.

Due to the ongoing Covid-19 pandemic, TechRadar wasn’t able to test the Motorola Edge before release but we’ll run you through all its specs and features (and compare the phone to devices we have tested) so you can get an idea as to how it’ll run. 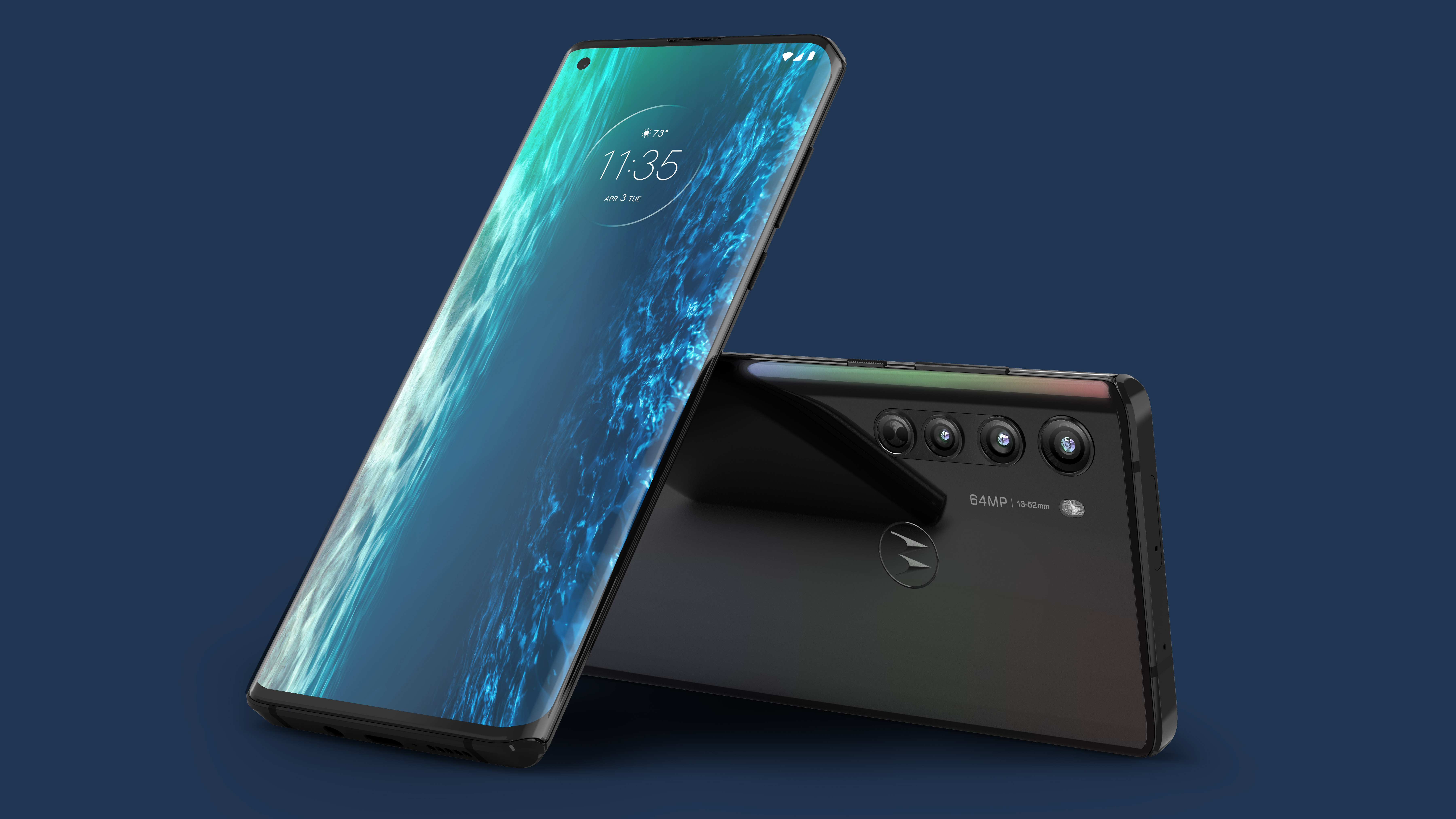 The Motorola Edge is set to come to the UK in May 2020, and the US sometime in the summer. We don’t know its exact release date anywhere, or even rough release windows in other regions.

In terms of price, we know how much the Motorola Edge will cost in Europe, and that is €599 (roughly $650, £520, AU$1,020). While prices won’t be exact conversions in various countries, the prices do suggest we’re getting a relatively mid-ranged price, nothing like the astronomical sums of the Samsung Galaxy S20 Ultra or iPhone 11 Pro Max.

If you’ve seen a premium smartphone in 2020, you’ve seen the Motorola Edge – it’s a fairly large phone with a curved display, top-left ‘punch-hole’ cut-out for the camera and chunky camera array.

This display is 6.7-inches, and it’s FHD+ with HDR10 and a 90Hz refresh rate. It’s also got a 21:9 aspect ratio, so it’s a bit long and thin compared to other smartphones. The curve of the screen is more pronounced than in other phones, at 90 degrees, but Motorola doesn’t think you’ll find this annoying – in fact, it’s looking to win over people who aren’t fans of curved displays.

The Motorola Edge curved display has a range of special optimizations, such as the ability to ignore accidental touches. Yo can also use it for navigation tricks, when gaming the curved screen can be used like an extra button, and apps will automatically detect the curved screen so keyboards and other typeable areas don’t spill out into the curve. 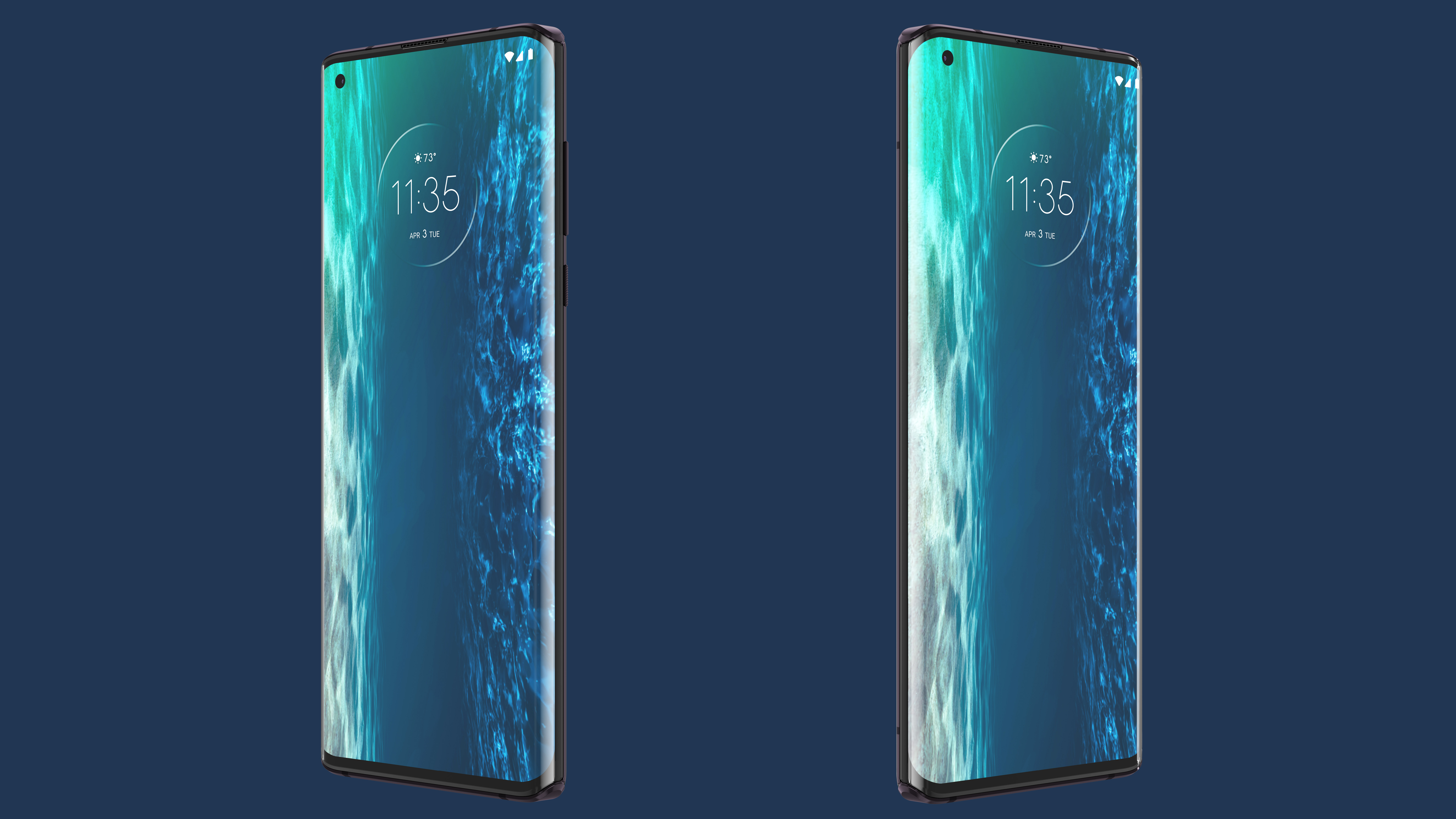 All in all, it sounds like Motorola has heard people’s complaints with curved displays, and instead of backing away from them as other companies have, is looking to fix the issues. We’re certainly intrigued to see how well these work.

The design of the phone itself has something that’s a little surprising for a flagship phone – a 3.5mm headphone jack. Most top-end devices from all companies have dropped this in 2020, but you won’t have to use the Motorola Edge’s USB-C port for wired audio now.

The back of the Motorola Edge certainly resembles previous Motorola phones, as the company’s logo sits in the middle, with a vertical camera array placed on the left-hand-side of the back.

The Motorola Edge misses out on the 108MP main snapper of its Plus counterpart, but that doesn’t mean you should turn your nose up at it.

On the Motorola Edge you’ll find a 64MP main, 16MP ultra-wide (doubling as a macro), 8MP telephoto (for 2x optical zoom) and Time-of-Flight snapper, so the phone’s array seems pretty well kitted out.

Based on the specs, this main camera seems to have the same sensor as the main one in the the Oppo Reno 3, which we found fairly decent, but software plays a big part in how a picture comes out, so we’ll make sure to test it out fully when we can. 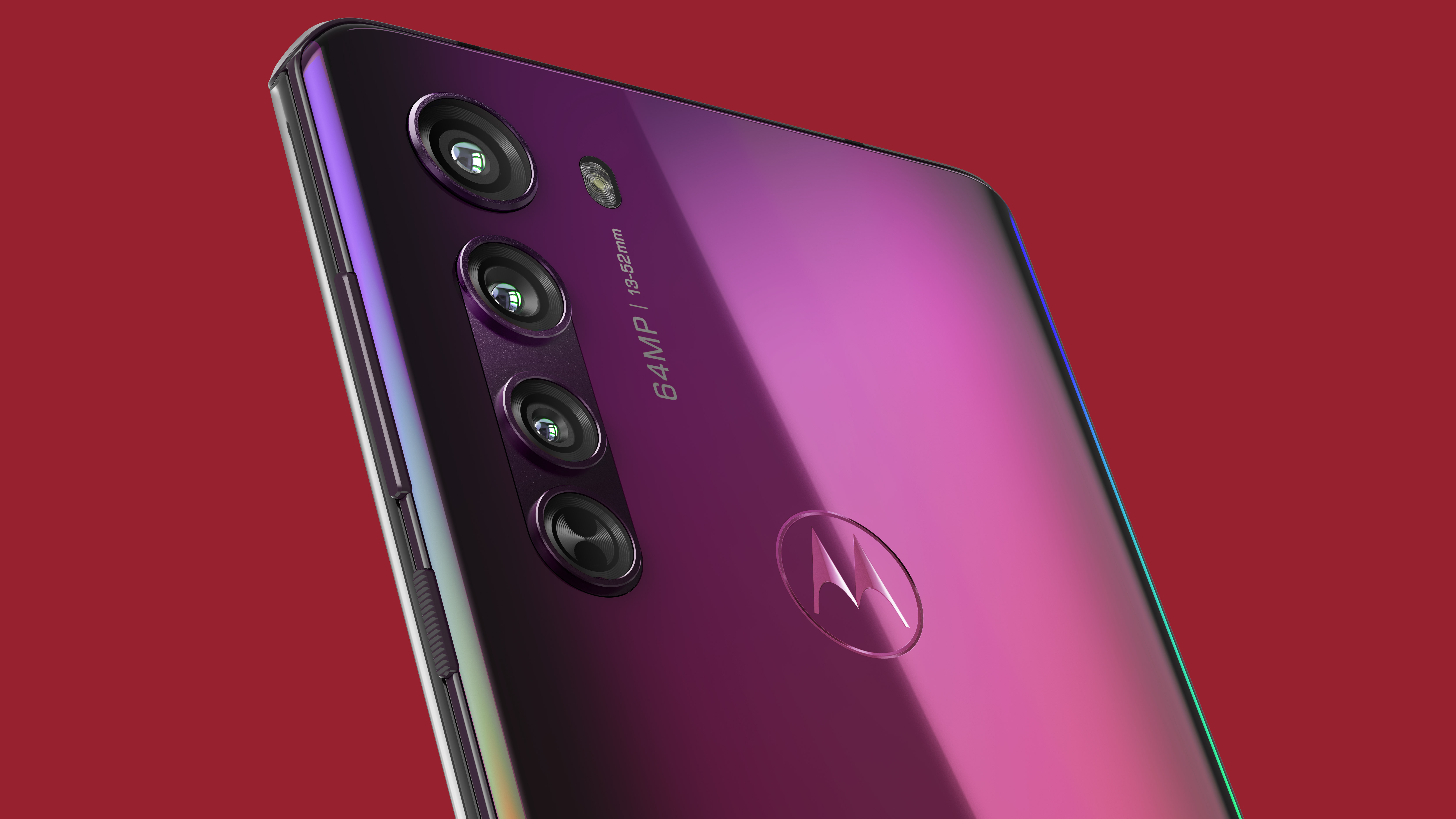 The front-facing camera of the Motorola Edge, housed in that cut-out, is 25MP, so it should take fairly decent selfies. This seems to use the same sensor as the selfie snapper on the Samsung Galaxy A50, and this was a pretty popular phone for that reason, so we’re expecting good things.

There are a few useful video shooting modes here like horizon detection, which automatically detects the horizon to keep your videos looking straight even when you’re moving quick. There's also advanced video stabilization, which again should stop videos looking too shaky, plus a video portrait mode which can automatically blur backgrounds in videos as well as stills.

The Motorola Edge uses a Qualcomm Snapdragon 765G processor, a step down from the 865 of the Edge Plus, and this is one of the phone’s weaknesses compared to its sibling. However, since the Edge doesn’t have HDR10+ or a 108MP snapper like the Edge Plus, we’re not sure the difference will be felt that much.

Indeed the Motorola Edge is a 5G phone, so if you’re looking for the next generation of connectivity without breaking the bank it’s definitely an option.

The chipset is paired with 4GB RAM in North American or 6GB in the rest of the world. Nor is the 128GB internal storage, but this can be expanded up to a whopping 1TB with a memory card. 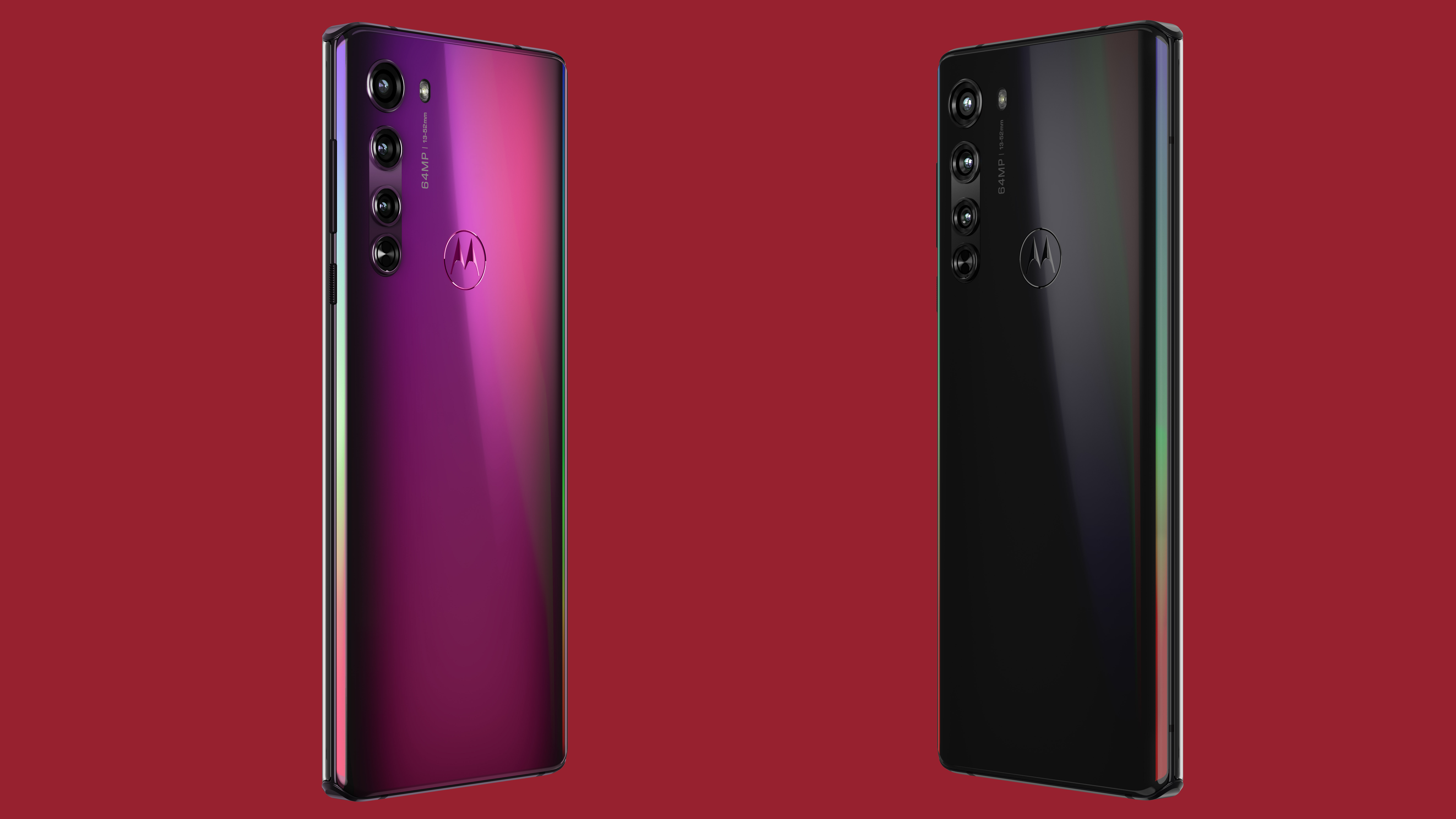 The battery here is 4,500mAh, which is pretty decently large, however the charging is only 15W which is slower than nearly all the device’s competitors.

Motorola made a point of mentioning the dual speakers of the Motorola Edge were tuned by Waves Audio, a respected music software company, so movies, music and gaming should be elevated by the sound coming from the phone.

One other intriguing fact about the phone is that while it’ll come on Android 10, the experience won’t technically be ‘stock Android’ as previous Motorola phones have been able to boast. Instead, it comes with ‘My UX’, which should let users customize their Android experience in many ways.

So as well as choosing a background like in all phones you can choose font, font size, icon patterns and even a color scheme, fulfilling the core Android promise of full customizability.

We’ve seen similar things before, for example certain Oppo phones let you change icon style, but My UX promises this on a larger scale. We’ll need to test it out to see what this really entails, though.

A returning feature from previous Motorola phones is Moto Actions, shortcuts to access parts of the phone. These include a ‘karate chop’ motion to turn on the flashlight, taking a screenshot by tapping three fingers at once, and twisting the handset in your hand to open the camera.

These aren’t exactly game-changing features, but if you’ve ever moved from a Moto phone to a different device, you’ll likely feel their absence.