The Ford Mustang Mach-E is the first fully electric car from the American auto maker, and while it bears the famous stallion brand, it's not exactly what you'd imagine a Mustang to be.

Instead of a two-door muscle car, which Mustangs have bee ever since their introduction in 1964, the Mustang Mach-E is actually a five-door, mid-size SUV ready to take on the likes of the Jaguar I-Pace, Audi e-Tron, Kia e-Niro and upcoming Tesla Model Y.

Add into the mix the fact the iconic V8 power has also been swapped out in favor of greener, silent electricity and you may begin to wonder if Ford has forgotten what the Mustang is all about.

However, you still get the classic Mustang shape – albeit jacked up – and the famous pong is still prancing across the front of the Mach-E. What's more, you can pre-order the Ford Mustang Mach-E now, if it takes your fancy.

If you're still on the fence, here's everything we know about the Mustang Mach-E so far. 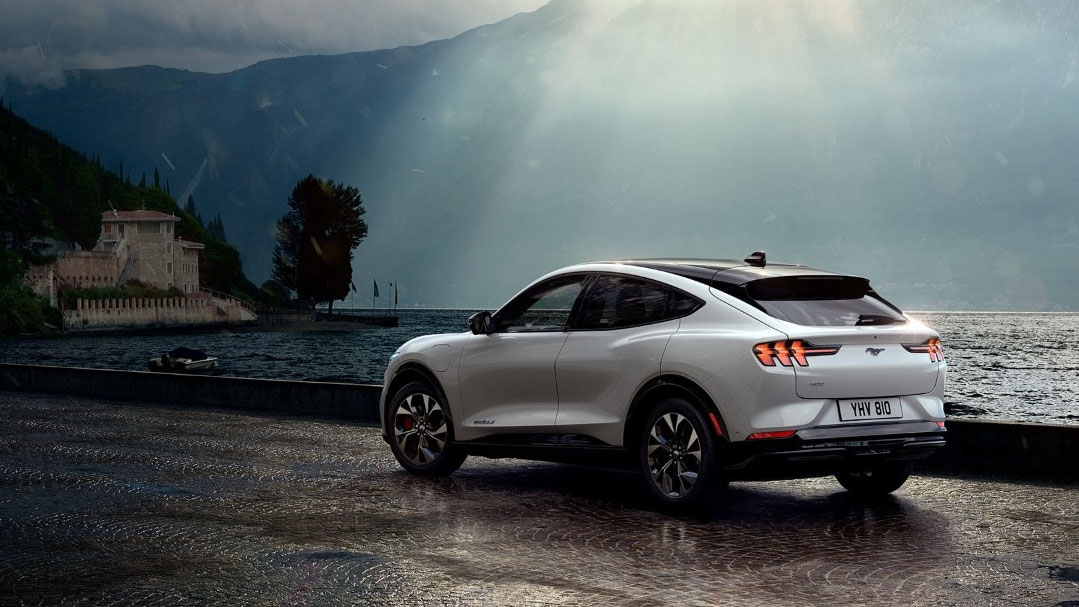 The Ford Mustang Mach-E release date is slated for late 2020, so we expect the first electric cars to roll off productions lines sometime between September and December. It's available for pre-order on the Ford website, if you fancy staking a claim early.

The Select Mustang Mach-E is available at the starting price as RWD (rear wheel drive), but you can also get it in AWD (all wheel drive) – which bumps the price to $46,595, improves its 0-62mph time, but decreases the estimated range from 230 to 210 miles.

Meanwhile, the Premium model offers a host of additional features over the Select – including larger wheels, a handsfree tailgate, panoramic glass roof, heated wheel and front seats, and more.

It also arrives in four battery and powertrain options. There the standard range RWD (offering 230 miles) and AWD (210 miles) models, which are joined by a pair of extended range options.

The extended range RWD offers up to 300 miles on a single charge, while you can expect around 270 miles from the AWD powertrain.

In the UK, things are much simpler. There are four models in total – two RWD and two AWD – to choose from. There was a fifth option, but the limited First Edition model has already 'sold out'.

The entry-level £40,350 Mustang Mach-E price gets you the base RWD model which boasts a range of 280 miles. If you opt for the extended range model – which aims to deliver 370 miles on a single charge – the Mustang Mach-E starting price rises to £49,980.

For those looking for enhanced performance, the Ford Mustang Mach-E is also available with an AWD powertrain in the UK.

You will need to pay for the additional drive, but the extra cost also bags you bigger, 19-inch wheels, adaptive LED Mustang signature headlights, red brake calipers and more.

The standard range AWD Ford Mustang Mach-E price starts at £46,650, with the extended range model bumping that up to £57,030.

Ford will also bring the GT version of the Mustang Mach-E to the UK in 2021, and claims it will have a 0-60mph time of under five seconds – however it's yet to reveal how much it will cost, or any of the other specs.

As we've mentioned, the Ford Mustang Mach-E isn't exactly your standard Mustang with the fact that it's a SUV rather than a two-door sports car.

However, Ford has kept a number of styling points from its iconic vehicle and brought them to its first fully electric car including Mustang front and rear light blocks, the bulbous hood, sleek roof profile, wide wheel arches and the pony badge on the front grille.

So, how do you get in? There are touch-sensitive buttons on the B pillar (the pillar between the front and rear windows) which, when pressed, will pop the doors open for you.

As you approach the car, the buttons illuminate, showing you where to touch, and the Mustang Mach-E will also be able to automatically lock itself when you exit and walk away from the vehicle.

As for the Ford Mustang Mach-E range, it really depends on the model you purchase. If you opt for an extended range Mach-E, you could be looking at over 300 miles from a single charge, but even if your budget can't stretch that far, Ford has also built in fast charging.

The extended range Mustang Mach-E electric cars support 150kW DC charging, which can equate to between 47 and 57 miles of range in just 10 minutes – provided you're hooked up to a compatible fast charger.

This would also take you from 10% to 80% in 45 minutes, and just 38 minutes for the smaller battery capacity in the standard range models.

It means a suitable top-up can be achieved at a rest-stop with a compatible fast charger.

Of course, you'll also be able to charge up your Ford Mustang Mach-E at home by plugging it in to a standard wall socket (Ford includes the required charging cable with the car), although top-up times will be much slower – about 8 miles of range per hour.

However, you can get a faster charger or higher voltage socket installed at home, which can improve the recharge time to around 22-32 miles of range per hour.

It has a physical dial built into it towards its base, which allows for easier, tactile control over various settings and reduces the amount of time required staring at the screen rather than the road.

The display runs on a new version of the Ford Sync interface, and also comes with voice control. Ford's also included wireless Apple CarPlay and Android Auto in the Mustang Mach-E, allowing you to mirror you phone's core apps on the car's screen.

That's not the only digital display on offer though, as Ford has also squeezed a 10.2-inch display into the cluster behind the steering wheel.

There are USB ports too, ensuring driver and their passengers can plug in and top-up their devices when on the move. Vital when it comes to keeping the kids occupied in the back – because remember, this isn't a traditional Mustang with a couple of seats crammed in the rear as an afterthought, this is a full 5-seater SUV. 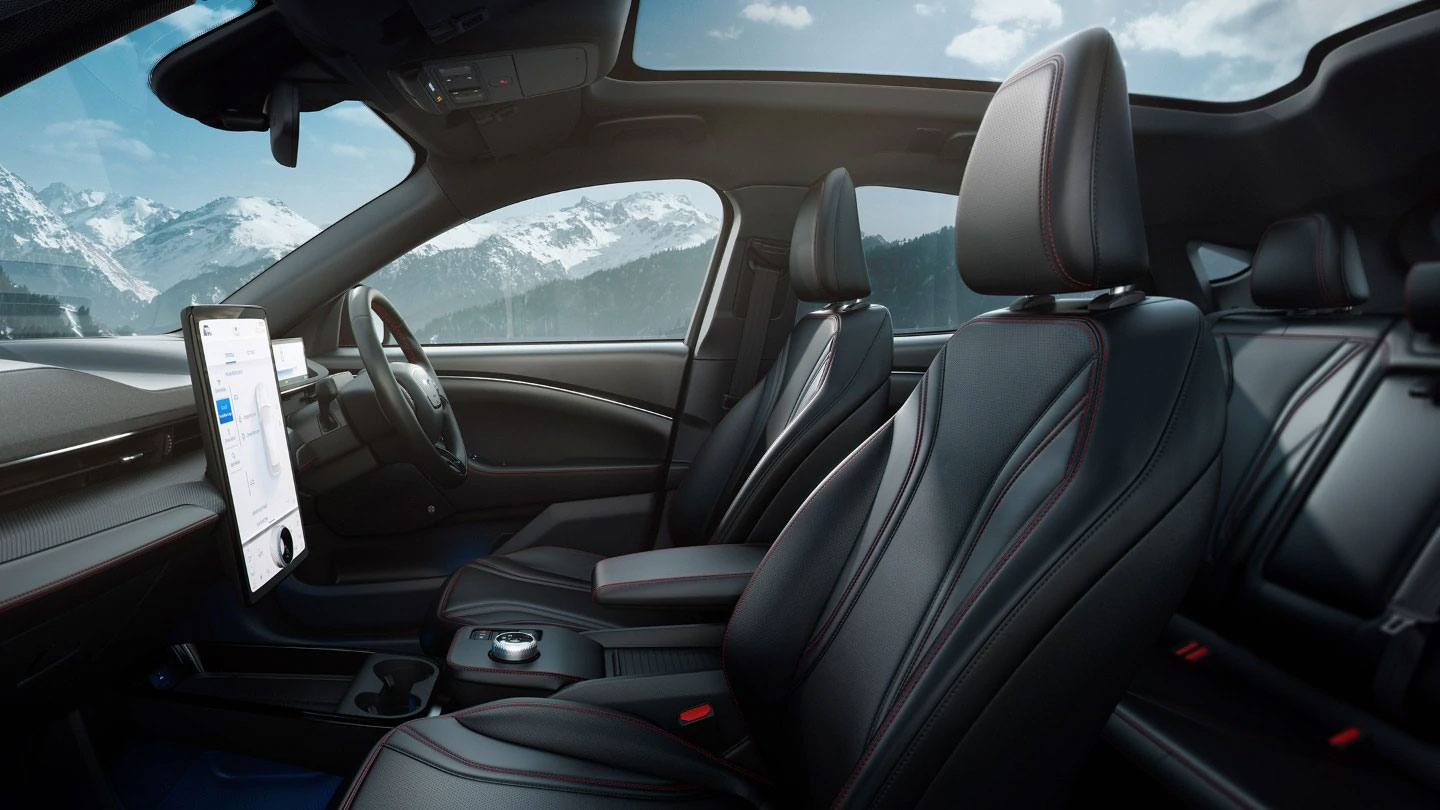 Ford is packing in a range of driving aids which are becoming common place is many new cars these days. It includes adaptive cruise control with stop and go. This will see the Mustang Mach-E accelerate (up to your preset max speed and decelerator with the car in front. It will be able to bring you to a complete stop in traffic, and set off again – all without you having to touch the accelerator pedal.

There are four cameras situated around the Mustang Mach-E which can provide you with a clear view of your whole surroundings – which will likely be especially useful when it comes to maneuvering in tight spaces and parking.

If parking is a problem the Ford Mustang Mach-E also comes with Intelligent Active Park Assist, which can automatically park you in a perpendicular or parallel space.

While the features at launch are certainly welcome, Ford is promising future improvements, updates and new features for the car via wireless, over-the-air updates.

It's already confirmed that it expects to push its first update to the Mach-E within six months of it rolling off the production line, and future updates could include performance improvements, updates to the infotainment system and brand new features not currently available.

What's more, the Mustang Mach-E will be able to update itself while parked outside your house over Wi-Fi or cellular, and some installations may take less than two minutes and won't interrupt your use of car.