The beautiful game is back today as Germany's Bundesliga restarts its 2019/20 season and offers a glimmer of hope to football fans all over the world. Like nearly all global sport, the league ground to a halt back in March due to the Covid-19 pandemic, but now top-tier European soccer is back on the cards with some fantastic fixtures scheduled across Saturday, Sunday and Monday. Ready for kick-off? Here's how to watch every match today – either on TV or by using a reliable online Bundesliga live stream today.

You'll find a complete Bundesliga fixture list below, with Saturday's afternoon matches providing an ample amount of action and goals – not least in the eagerly anticipated Dortmund vs Schalke game.

Dortmund have serious aspirations to lift the Salatschüssel, while Schalke hope that a strong finish to the season could propel them into European football in the next campaign.

English football fans will be particularly interested in Dortmund's rising Three Lions star Jadon Sancho, who is part of a ferocious Dortmund attack that also features Norwegian wunderkind Erling Braut Haaland, German international Mario Götze, and Eden Hazard's younger brother, Thorgan. Who makes the Dortmund starting IX each is anyone's guess, when you have that kind of talent!

American soccer fans also have plenty of reason to want to tune in to the Bundesliga, with promosing youngsters like Josh Sargent (Werder Bremen) and Weston McKennie (Schalke) plying their trade in the Bundesliga this season alongside USMNT veterans John Brooks (Wolfsburg) and Fabian Johnson (Borussia Mönchengladbach)

With that in mind, here's this weekend's complete German football schedule, followed by how to live stream Bundesliga on TV and watch matches online from anywhere in the world.

With no less than nine first-rate football matches set to go ahead in the Bundesliga this weekend, we hope you can join us as we rejoice in this small slice of normality returning.

How to get a FREE Bundesliga live stream today

Sky Sports has the broadcast rights to the Bundesliga in Germany and it's going big on the restart today, announcing that mid-afternoon fixtures will be available to watch for free – both online and on TV – in Deutschland and neighbouring Austria.

This means its never been easier to get a free Dortmund vs Schalke live stream – or watch any of the other 3.30pm CEST kick-offs.

Matches will be available to watch for free on German TV on the Sky Sports News HD channel, but even more conveniently online via the German Sky Sports website. The Sky Sports News HD Bundesliga live stream is like a constant highlight reel, cutting between matches at the most opportune times so you never miss a moment of the action.

The fixtures featured are:

Anyone from these countries currently abroad may find they can't access the streaming services they normally would at home. This is because of geo-blocking, but there's a very easy solution in the form of a VPN…

How to watch the Bundesliga from outside your country

If you're abroad and can't bear to miss out on the big Bundesliga restart, don't worry. While you may initially encounter a problem watching your usual domestic coverage in the form of geo-blocking, there's an easy solution to this common annoyance.

It's called a VPN and it's a clever bit of software that relocates your device back to your country of origin – thereby allowing you to regain access to the services you normally use (and almost certainly pay for) back home.

How to watch the Bundesliga live in the UK 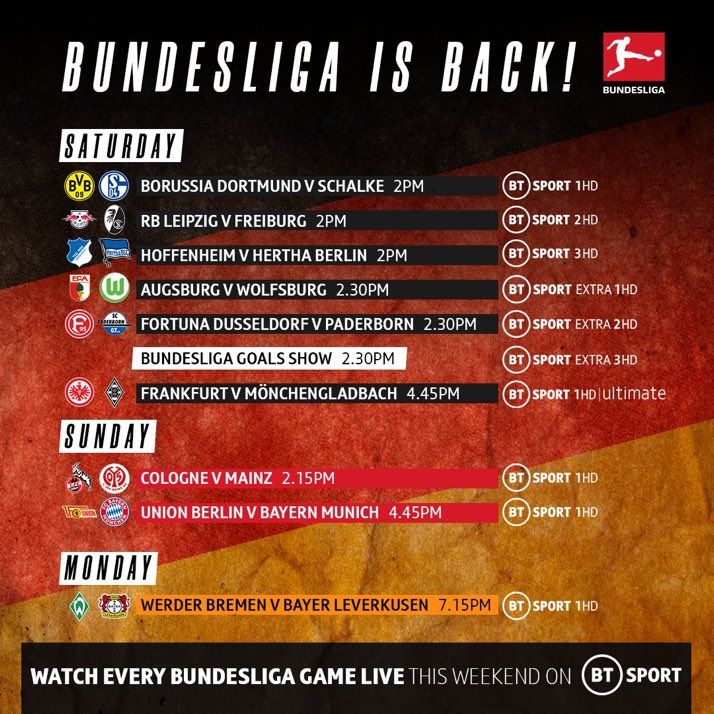 If you're out of the UK or Ireland but have subscribed to a streaming service you want to access from abroad, remember you can always use a VPN to enjoy all the content you've already paid for back home.

How to watch a FREE Bundesliga live stream in the US

Watch the Bundesliga: live stream the soccer in Canada

How to watch the Bundesliga in Australia on TV or online