One thing that’s come out of the ongoing Covid-19 pandemic is the development of a new type of app. These are known as contact-tracing apps, and you’ve likely heard of them.

The name gives you the core idea of what these apps do – essentially allowing users to identify if they may have been in contact with someone infected with the coronavirus.

However, while a number of countries around the world are planning to start using contact-tracing apps (and in some cases already have started), the exact apps and systems vary from place to place.

Below then, we’ll give you an overview of the solutions being worked on for the US, UK, and Australia. But first though, here’s a closer look at what exactly contact-tracing apps do.

What do contact-tracing apps do?

Contact-tracing isn’t a new idea. All it really means is attempting to identify people that may have contracted a specific illness, usually by asking someone who’s known to have it where they’ve been and who they’ve been in contact with.

But with Covid-19 the scale of the challenge is much greater than normal, given how many people already have it and how easily it spreads. So rather than questioning individuals, contact-tracing apps are being designed to automate the legwork.

It’s a method then of not just tracking who already has Covid-19, but of potentially getting countries safely up and running again while we wait for a vaccine. Though of course how effective it is depends not just on the technology of each specific contact-tracing app, but also on how many people have the relevant app running on their phones.

Contact-tracing in the US

The main contact-tracing app used in the US is likely to be a joint venture from Apple and Google, so of course the same app would work on both iOS and Android. Powered by Bluetooth, the app would exchange anonymous ‘beacon keys’ with everyone you come in contact with (assuming they’re also using the app).

Then, if someone tests positive for Covid-19, they’re able to log this with the contact-tracing app, and it would alert those who the person came in contact with that they’d been exposed to the virus.

The alert may not come until days later, as the infected person may not have initially known they were infected, and the contract tracing app only ‘periodically’ downloads the beacon keys of everyone who has tested positive in a user’s region.

Importantly, these keys are anonymous – so if you get an alert that you’ve been in contact with someone infected, you won’t know who, when or where. But that’s okay, because if most people are running the app then everyone relevant will be alerted anyway. Users would also need to give consent for the app to share the fact that they’ve been diagnosed with Covid-19 (even though it’s kept anonymous).

The system doesn’t sound like it’s without its problems though. For one thing, it requires Bluetooth Low Energy to function, which could count out as many as two billion phones across the world.

Its focus on privacy meanwhile could hamper its effectiveness. Aside from requiring people to opt in, the fact that it doesn’t use location data could also limit the ability to identify coronavirus hotspots and map viral transmissions.

As such, there are rival apps in the works. Utah for example is working on a contact-tracing app called Healthy Together, which uses GPS and location data as well as Bluetooth.

Note that the Apple/Google app doesn’t have a name as such yet. In fact, it’s not likely to be a single app. Rather the tech could be integrated into an app for each country that chooses to use it. The actual app could vary from country to country, but the two tech giants have said they will limit the system’s use to one app per country, except where there’s a federated system in place, such as the United States.

So the app you have access to may end up depending on what state you’re in, and in some cases – as with Healthy Together – you might not be using Google and Apple’s system at all.

Contact-tracing in the UK

While the Apple/Google initiative being used in the US would have been an option for the UK, the NHS has decided to go in a different direction, using an app developed by the NHSX (the NHS’s digital division).

There’s no official name for the app at the time of writing, but it in some ways sounds similar to the Apple/Google model, in that it’s powered by Bluetooth, allowing it to log when you come in contact with anyone else using the app.

Then, if someone using the app gets diagnosed with Covid-19 or reports that they have symptoms, you’ll be sent an alert saying you were in contact with a potentially infected person. This alert may come days later, however, if they only got a diagnosis a while after you came in contact.

As with the Apple/Google contact-tracing system, this would all be anonymous – you wouldn’t know who the infected person was, just that someone you crossed paths with was diagnosed or had symptoms.

Another downside to this system is that the NHS’s app will need to wake up every time your phone detects another device running the app, which shouldn’t be required on Apple and Google’s system. It’s a difference which will likely mean the NHS app uses more of your phone’s battery.

Unlike the US and UK, which are still developing and trialing their apps and systems at the time of writing, Australia has fully launched its coronavirus contact-tracing app.

The app is called CovidSafe, and it’s available for those in Australia to download from the Apple App Store or the Google Play Store. Doing so isn’t mandatory, but the more people who use it the more effective it will be. 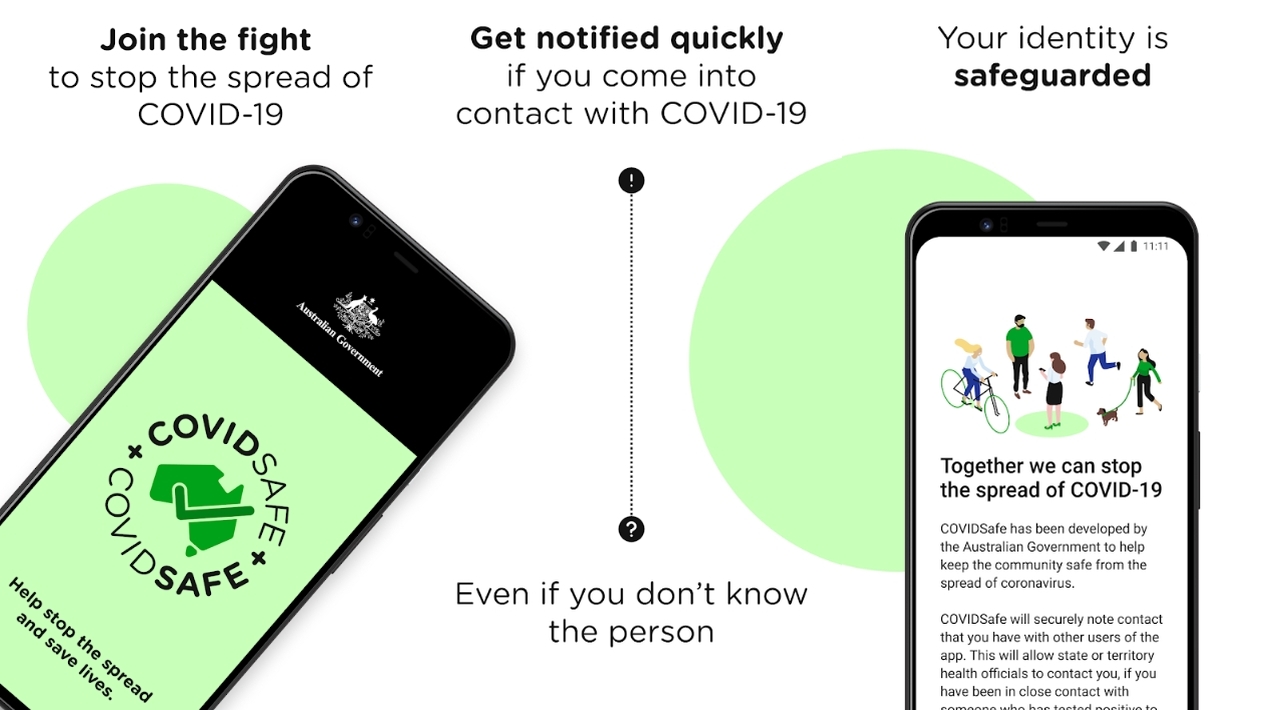 To set up the CovidSafe app you’ll be asked for your name (or a pseudonym), your phone number, age range, and post code, all of which will be stored on an encrypted government server.

Then, the app will work much like most other contact-tracing apps – it will use Bluetooth to automatically (and anonymously) log other app users that you’re in contact with, the data from which stays on your phone unless you come into contact with someone infected.

If someone is infected with Covid-19, and they consent to share this with the app, it will then send anonymized ID’s of everyone they’ve been in contact with for the last 14 days to the government’s secure server, allowing the relevant health officials to get in touch with affected people.

Having a centralized database like this comes with privacy and security concerns, but the app doesn’t track location, and the Australian government has assured citizens that the data can only be accessed by relevant health officials, and only for contact-tracing.